It’s double celebration time for a Warwickshire vet who is marking 40 years in the profession and the 20th birthday of the county town practice she established.

Anita White reached her ruby anniversary as a vet in September, with 36 of those 40 years spent working for Avonvale Veterinary Centres, which has seven branches across the county.

She is celebrating her four decades in the industry alongside the 20th anniversary of Avonvale’s animal hospital, in Broxall Close, Warwick, which she established back in 2000.

Anita, 63, graduated from Bristol Vet School in 1980 and joined Avonvale in 1984, having worked at a mixed practice in Yorkshire for her first job, in true James Herriot country.

Anita said: “When I graduated, the veterinary world was a male-dominated profession, a very different picture from how the industry looks today.

“The first Warwick practice I worked in was Cape Road, a small house which we quickly outgrew. It was then we developed the site in Broxall Close, which became the first veterinary hospital in the Midlands.

“I have seen many changes in technology over the years, particularly in diagnostics like ultrasound and even the recent introduction of CT in small animal practice.

“There have been great advances in medicines and vaccines and popular dog breeds have changed over the years, too.

“In my time as a vet, I am most proud of establishing our Warwick hospital which now runs as the hub of all seven Avonvale surgeries bringing round-the-clock care.” 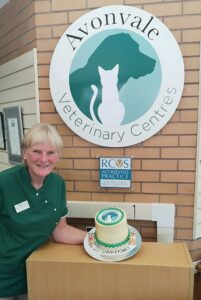 “It’s a lovely place to work because it’s a small house, just like the one in Warwick was before we moved,” added Anita.

“One of the nice things about working at Avonvale is there are so many staff, like me, who have been with the business for a long time.”

Simon Davies, clinical director at Avonvale’s Warwick hospital, said: “Anita has always enjoyed her work enormously and shown extra special care and interest in her staff and the pet owners who come our way. She has been a joy to work with and has taught me a great deal over the years.

“It’s great to be able to celebrate Anita’s anniversary at the same time we mark our Warwick hospital’s 20th birthday, something she played a major role in making happen.”

For more information about Avonvale, which has branches in Kenilworth, Stratford, Warwick, Heathcote, Southam, Wellesbourne, and Cubbington, visit www.avonvets.co.uk or search for Avonvale Veterinary Centres on Facebook.